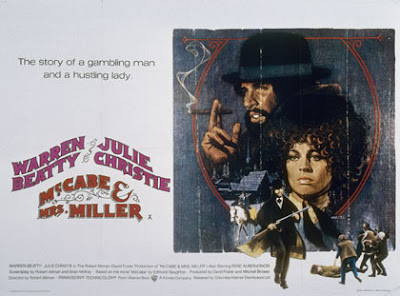 1902. The golden days of the "old west" are dead (if, in fact, they ever existed). The Industrial Revolution is well underway. In the mountains of Washington state is a shantytown centered around a filthy saloon/hotel, where the snow and mud never seems to end. This is where the title characters meet, opportunistic John McCabe and seasoned professional whore Constance Miller, surrounded by bearded men who haven't seen in a bath in months and a trio of hookers with little experience and even less sex appeal. This is a western? A mere two years after Peckinpah's The Wild Bunch and George Roy Hill's Butch Cassidy and the Sundance Kid (both 1969), it's not surprising that Warner Brothers not only balked when distinctive director Robert Altman delivered his final cut, but had no idea how to market this genre-defying oddity. Naturally it did poor business. The years have been kind, however, to McCabe & Mrs. Miller. As in many Altman films, the overlapping dialogue and lack of discernible storyline  take some getting used to at first, but patience will be rewarded with a film virtually like no other.

Altman gives us the barest of storylines: McCabe comes into the filthy mountain town, establishing himself as a fabled gunfighter and a skilled card shark before setting up a piss-poor excuse for a whorehouse. After riding the girls into town (juxtaposed with a cross being erected at the top of the newly built church), the women set up shop in outdoor tents; one goes nuts and tries to stab a john to death. Enter Mrs. Miller, a British import with vast experience in the cathouse game, who partners with McCabe to build a bigger, better house of pleasure for the town's men. This all threatens to fall apart when a mining company makes an offer to buy McCabe's share of the town, an offer he refuses at his peril, as the company is known for hiring professional gunmen to plug a bullet into anyone they can't reason with. This synopsis makes McCabe sound far more intricately plotted than it really is. The dialogue is tough and memorable, the characters complex and sharply drawn, but story is secondary to mood and atmosphere, captured splendidly in the film's isolated Canadian wilderness locations. Imagine Altman's M*A*S*H* in the early 20th-century in the dying west, minus the gallows humor, and you have a pretty fair idea of what to expect from this film. Altman cast one of Hollywood's most handsome leading men, Warren Beatty, in a role that is perhaps his best work, and Julie Christie gives a mesmerizing performance that shows off quite a bit of range, earning an Oscar nomination in the process. The cast includes a number of Altman favorite regulars, including Shelley Duvall, Michael Murphy, Rene Auberjonois, Keith Carradine, John Schuck, Corey Fischer, Hugh Millais (perfection as the smarmy killer), and Bert Remsen.

Judging by the number of walk-outs during the film at today's screening, it might be safe to say that this unusual Altman film is still a polarizing work and not the established masterpiece we film folk rightly believe it to be. It is barely a western, even in superficial terms, taking place in a locale several hundred miles north of the usual genre locations; the climax of the film takes place amidst swirling snow. Our protagonist is not much of a hero, or an anti-hero for that matter, and his heroine transforms from strong-willed business partner to uneasy drug addict. Both of them are at their lowest points by the finale. But that's what makes McCabe so interesting. Besides the gob-smacking visual style courtesy of cinematographer Vilmos Zsigmond, its deconstruction of western mythos makes it perhaps the most original revisionist western of the 1970s. There are nods to genre film classics that may be easy to overlook amidst all the grime and discomfort. As in The Gunfighter, among others, McCabe is presented as a man with a past he's trying to leave behind. This past turns out to be pure folklore. As in High Noon, no one helps McCabe duke it out with the assassins sent to take him out, but to be fair, they're a little occupied trying to put out a fire that threatens to destroy the town church. The town forges on without him, making his survival by the end credits vastly unimportant. Business will continue as usual without him, leaving him behind in the wake of "progress". The film's most gut-wrenching scene actually recalls a pretty consistent western trope, wherein a naive young man is tricked into pulling out his gun, then shot in cold blood for sport. That is the best of many scenes that will stick with you once the credits roll.

Adding another love-it or hate-it element to the film is the score by Leonard Cohen, made up of acoustic folk songs with lyrics that sound improvised on the spot, with a kind of rambling weariness that fits in perfectly with the rundown atmosphere of the film. While watching the film, I was reminded of the unusual scrubbed-clean musical western Paint Your Wagon from two years previous. There are obvious similarities in characterizations and narrative elements, but McCabe is without doubt much more interested in brutal realism over genre escapism.

McCabe & Mrs. Miller is showing twice more this week, Thursday and Friday at 1:30 in MoMA's Theater 3. See it!